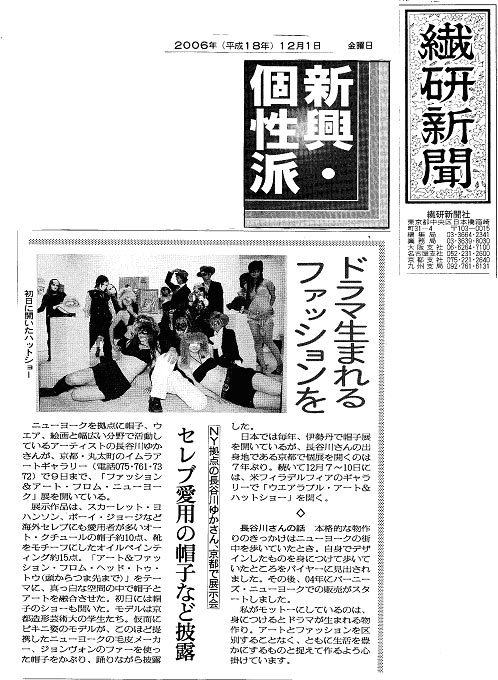 Yuka Hasegawa, an artist in NY who is multitalented in the field of hats, women's cloths, and paints etc. holds an exhibition called "fashion & art from New York " at the Imura Art Gallery (tel. 075-761-7372) in Maruta-machi, Kyoto from 17 Nov to 9 December.

The exhibition includes 10 haute couture hats admired by many celebrities in NY such as Scarlet Johansson and Boy George, and 15 oil paintings about shoes. In the exhibition, she fused hats and arts under the name of "Art & Fashion from head to toe." Also, she held a hat show on the first day, in which local art students participated as models. They wore Yuka's hats with fur from Jonnevon fur LTD that she recently tied up, and danced in front of audience with bikini-style bathing suits and masks. In Japan, she holds a hat exhibition in the Isetan department store every year. But it's been seven year since she had a solo show in her hometown, Kyoto. In addition, she plans to have an exhibition called "Wearable Arts & Hat Show" in Philadelphia from 7th to 10th December. Yuka told us that she grabbed a chance when she was walking the Street in New York. Some buyer suddenly talked her because her outfits by her own design were so unique. In 2004, she started the line for Barney New York. Her motto is creating something which vibrates a new drama when people wear it. She thinks that arts and fashion are both same in terms of enriching their lives.