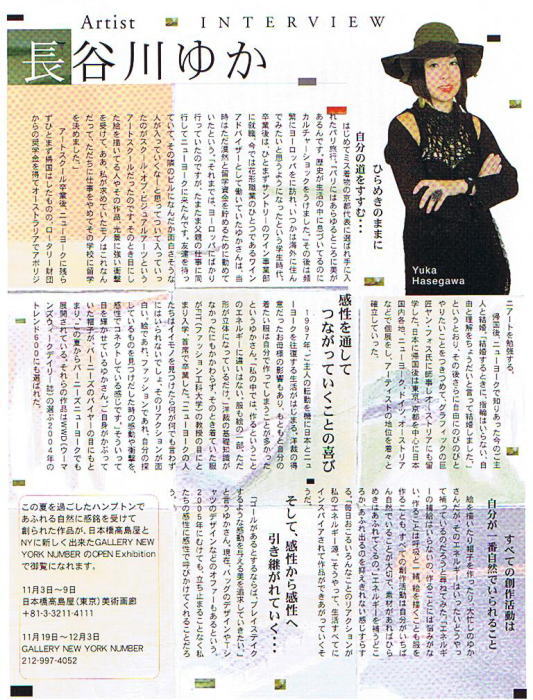 When Yuka was 18 years old, was nominated Miss Kimono Japan and the first prize included a visit to Paris, another inspirational opportunity. She felt the beauty everywhere in Paris and got a culture shock by the existing of history in their everyday's life. It was her first visit to a foreign country and she was fascinated by Europe, so intrigued with the diversity of art and fashion, she traveled Europe every year. After graduating Doshisha University, with a BFA, majoring in English literature, she got a job at Suntory as a wine adviser for a while to accumulate fund for study abroad. When she chanced to visit NY with her father for his business was her first visit to NY. When she was waiting for her friend, she saw interesting people walking by her and entered to the next building. She instinctively followed them in out of curiosity to see the building was the School of Visual Arts in New York. She was fascinated by students who are painting and their work and felt this is what I wanted to do. She decided to quit the job and move to New York City that instant. After graduating the School of Visual Arts in New York, she went back to Japan for the time being. In 1992, she received a scholarship from Kyoto Rotary club to study Aborigine cultural history and art works in Australia. After returned from Australia, she got marry with who met in New York. When she got marry, she said "I do not want an engagement ring, but I want freedom and understanding." Then in 1993 she studied graphic arts, via a scholarship from the Salzburg Fine Art Academy in Austria where she also studied under the famous graphic artist, Jan Voss. After she finished studying in Austria, she held solo shows through Japan, New York, Germany and Austria to build up her status as an artist. In 1997 she started life traveling between New York and Japan due to her husband's removal. She has been making her clothes that she wants to wear by influence of her mother who is good at dressmaking. "This must be the energy for create something. Clothes is a part of the picture, it is just a three dimensional thing." she said. Even though she did not have any basis knowledge of dressmaking, her outfit she was wearing caught professor's eye at Fashion Institute of Technology then enter FIT and graduated at the top of FIT. She said with glaring her eyes, "People in New York always say something at all costs when they find something nice and good which reaction is interesting to me. I feel they connect impression and impact with their sensibilities when they found something they have been looking for." The hat she was wearing was discovered by buyer at Barneys New York and she displays her seasonal collection of women's hats at Barneys New York from this summer. In addition, her collection is printed on W.W.D. Trend 600 in 2004. Even though she is busy with painting and making hats, we asked, how to supply your energy. She said, "I do not need to supply my energy, there is no worries for creations. Creation is the same as breathing. The most important thing for creative activities is being a natural my self. If there is materials I can be a full of inspirations. My energy source is come from the reaction which things happen in everyday's life." Therefore, her creations are inspired from the everything of life. "If there is a goal, I would like to search the beauty which gives excitements." Right now she is setting out to design bags and t-shirt, and so on. She also must be feasting our eyes with her sensibility toward the next year.